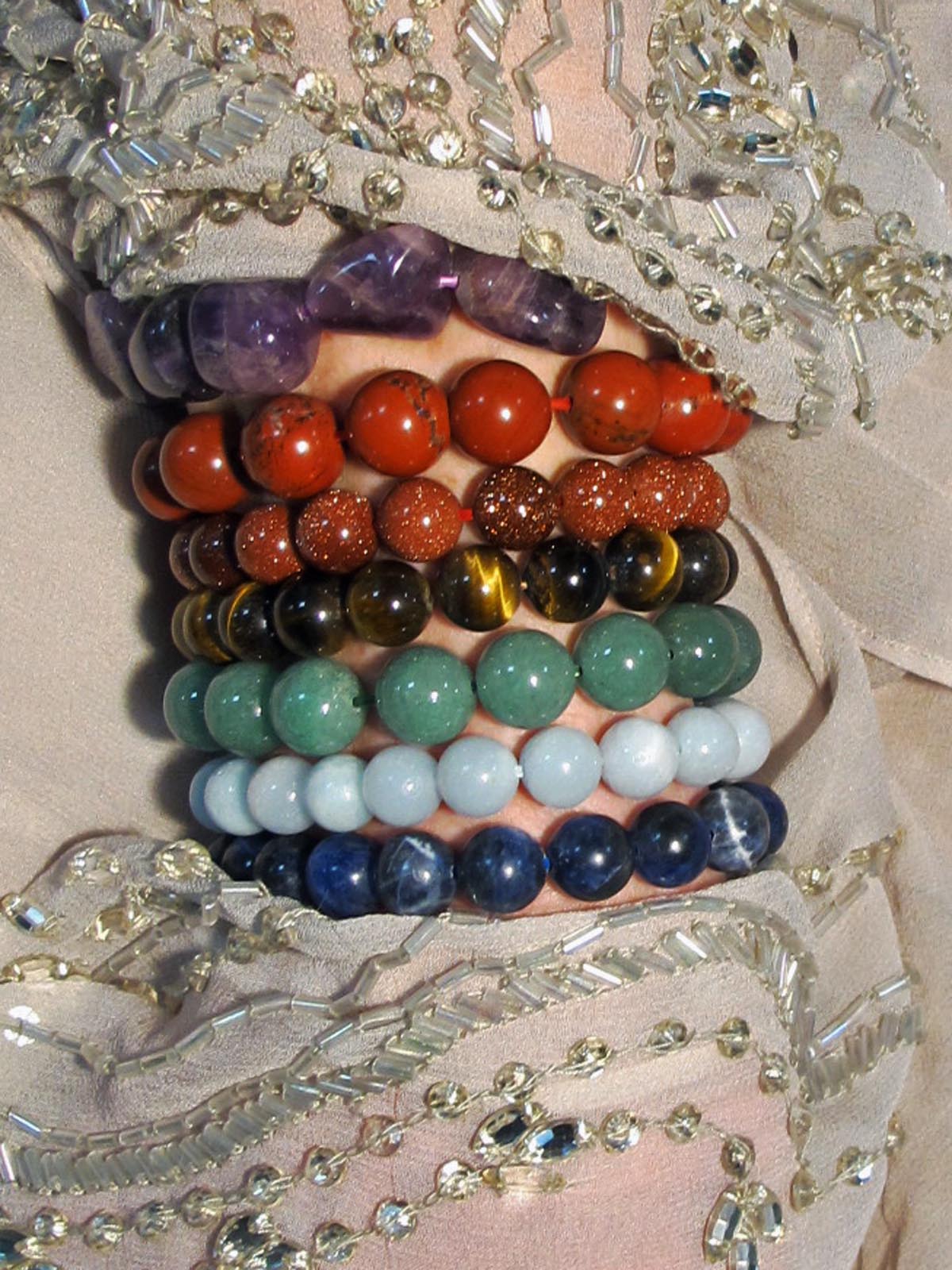 Throughout history different gemstones have been prized at different times.  What all times have in common around the globe, is the love of jewellery.   Adorning our bodies as a means of self expression and beauty is something people of diverse backgrounds share.  And using the beauty of nature is a universal passion.

People adorned their bodies with whatever they had to hand. 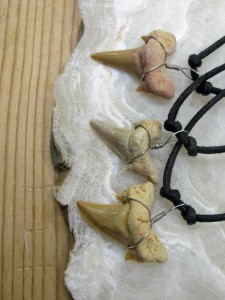 Early and tribal peoples have used the inedible parts of their food – the teeth of their prey or similar trophies.   Maybe that’s why Fossil Shark tooth necklaces as popular with surfers?

As people began to travel and trade more widely, so did the practices of wearing crystals. Beautiful stones were mined from the earth and used as units of currency.   Gemstones became symbols of wealth and were highly desirable to those who had any hope of owning them.

Malachite was used in jewellery by the ancient Egyptians, Greeks and Romans.   Those great civilisations recognised its hypnotic quality.  It is characterised by its deep green colour and concentric circle patterns.  As a birthstone, it has been associated with Scorpio.

By the way, if you want more information about any of the jewellery, just click on the photo links. 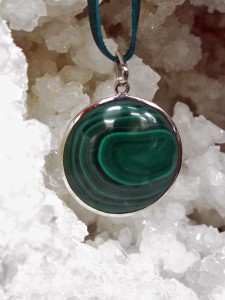 Amethyst is a perennial favourite.  Like malachite, amethyst was first used in jewellery by the Ancient Greeks and Egyptians. Until the 18th century amethyst was prized as one of the five cardinal gems.  The others are diamond, emerald, ruby, sapphire.  Amethyst lost its high monetary value when large deposits were discovered in Brazil and Uruguay.  This also meant that it became much more available,  hence its huge popularity today. 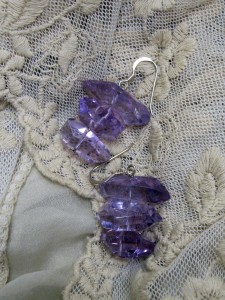 Amethyst is used in large and small pieces and combined with other gemstones to fabulous effect.  It has been linked with the star sign Aquarius.

The Victorian age saw the birth of tourism.  Admittedly only for the wealthy.   With this saw a fascination with all that was exotic and different.  See our Pinterest Board on Victorian Decor which shows the style.  The wealthy Victorians were great collectors, inspired by travellers such as the academic and collector, Charles Darwin.

Gemstones became highly collectable and made into ornate jewellery as we can see in antique shops today.   Ruby and Sapphires became fashionable at this time.  Ruby is the birthstone associated with Aries.  Both Sapphires and rubies look set to be ever popular and classic choices.   Although their value means that for most of us, small is beautiful.

Aquamarine is the overlooked cousin of the better known emerald.  They are both varieties of Beryl.   Aquamarine is valued for its transparency and subtle pale blue colour.   Believed by some to offer protection and calm, Aquamarine has been celebrated as a birthstone of Gemini, Pisces and Aries. 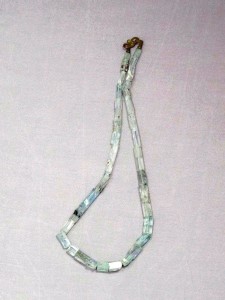 Amber is famously a fossil tree resin.  It is valued for its natural beauty, golden orange colour and often has exquisite and fascinating insect inclusions.    Insects which have been fatally trapped in the tree resin 1000’s of years ago.  Amber was used in jewellery in the Stone Age, around 13,000 yrs ago!  Linked with Leo, rarr! 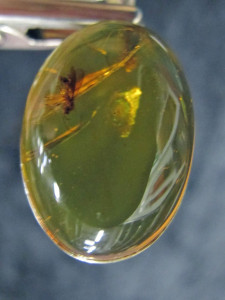 Now for some more recent players…….

Tourmaline is a complex but common mineral which has started to be used in jewellery as it is so stunning.  It can be relatively inexpensive and comes in a variety of colours, black, green, red/pink and the rarest blue.  Fine specimens, however, can sell for thousands of pounds. 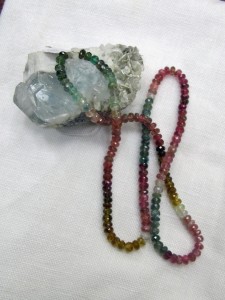 Are you a fan of rhodochrosite?   Prized for its amazing pink colour, with attractive banded markings.  Rhodocrosite makes the perfect love token as an anniversary or Valentines gift, or simply for those who look pretty in pink!

Opals are really a girl’s best friend and the recent finds in Ethiopia make them just about affordable.  Whatever the occasion, Opal is the answer! 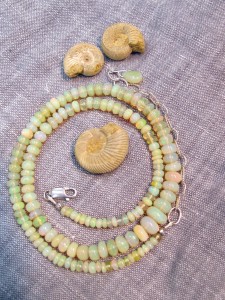 First discovered and described in the 1940s in Japan,  Sugilite has now become incorporated into jewellery.  It boasts a vivid purple colour and is certainly unusual and hard to find – but highly sought after by collectors.  Sugilite is also known as Lavulite and said to be linked with spiritual wisdom and love!

Larimar was discovered in 1974.   It is valued for the intense pale blue that resembles the Caribbean Sea.  Indeed the Dominican Republic is the only known place where it is found.  Nothing raises value like being super rare! 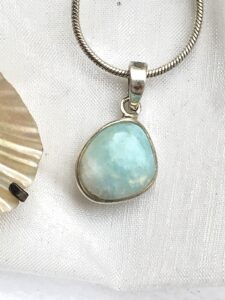 But psst, before we go …. fancy something a bit different with fresh appeal?
Let us introduce you to fossil and meteorite jewellery!
Fossils can be surprisingly attractive, such as polished ammonite pendants, either showing their crystalline structure or mother of pearl shell.     It doesn’t stop there, trilobite cufflinks anyone? 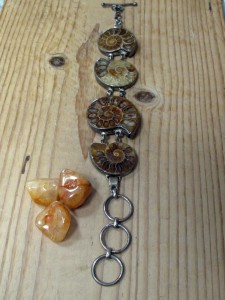 What can start conversations like wearing something that’s hundreds of millions of years old?  Wearing something from space maybe?  The cosmos has provided the latest geology jewellery trend in wearing your investment in the form of a ‘meteorite’.   We have a blog on meteorites if you want to know more. 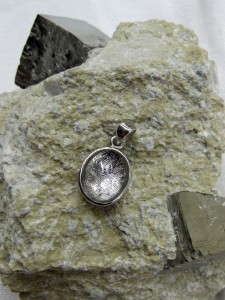 There are gemstones we haven’t yet covered.   Labradorite, jet, obsidian, peridot, herkimer diamonds – subjects for another day we guess.

Remember, whatever your passion – just WEAR IT and Enjoy!!  If you are inspired or want to know more, click here for our jewellery department!  Thank you for dropping by!