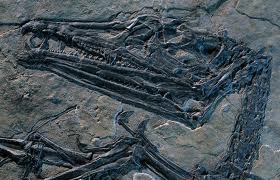 Pterosaur Eggs – what do we know?

Zhejiang Museum of Natural History, China, purchased a unique fossil, found by a local farmer of a Pterosaur lying next to a fossil egg.  It is assumed that the pterosaur laid the egg.

Subsequent research suggests that pterosaurs behaved more like reptiles than birds when it comes to laying and looking after eggs.  Current theory is that they buried their eggs and left them, unlike birds who invest considerable energy in incubating their eggs.  Although the clusters of findings suggest that the birds did nest in groups.

The Pterosaur eggs  had a relatively soft parchment like shell, which was not strongly mineralised, rather like modern snakes eggs.

Discovered in 2005 in the Turpan-Hami Basin, northwestern China, there is a 120 million year old Pterosaur egg site, also with numerous bones, both male and female.  Features of the skulls suggest physiological differences between the sexes.  Dr David Unwin, of Leicester University explained to the BBC:

“This seems quite reasonable – females lay eggs, they probably need a slightly wider pelvis. And then the really exciting thing is that she has a skull which lacks any kind of adornment or decoration whatsoever.  When we look at other individuals of Darwinopterus, we find quite a few individuals with a large crest on the skull. …. We’re very confident now that we’re dealing with two genders – males with big crests and small hips, and females with no crest on the skull and large hips.”

It is thought that this habitat was destroyed by ferocious storms.

Although this site tells us much more about Pterosaur Eggs than was known before, we still have a lot more to learn!

We don’t have any Pterosaur Eggs in stock – for obvious reasons! – but we do have a lot of great Fossils – 1000’s more than we are able to put on the site in fact, so if we can track down anything you are looking for, try us out – contact us – we started our collection in 1975 so …..

We would also encourage you to display your rocks at home – they are such treasures and we should shake off that dusy old image – get your rocks out of the closet – here’s how…!!