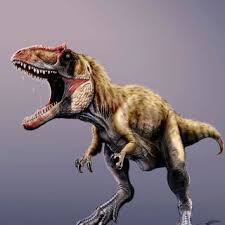 A new carnivorous dinosaur has been described and named recently: Siats Meekorum.  A partial skeleton comprising 13 vertebrae and some limb bones were found in eastern Utah, between 2008 and 2010.  They belonged to a juvenile predator that weighed 4 tons and was 30 feet long.

It was named after a mythical monster in Native American folklore and is a member of the family of dinosaurs called Neovenatorids, which have been found in Australia, Japan, China, South America, Europe and North Africa.

Siats and its cousins flourished during the early Cretaceous Period, from 110 to 90 million years ago, whilst the Tyrannosaurids were still in nappies.  Only when Neovenatorids became extinct did the Tyrannosaurids take prime position in the food chain and grow to sizes in excess of Siats, reaching 40 feet in length and weighing up to 8 tons.