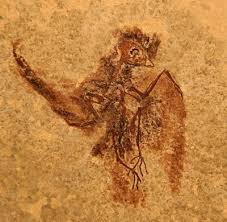 A 50 million year old fossilised bird was found in Wyoming USA.   It is only 10 centimetres long.  Its well-defined feathers lead Paleontologist Daniel Ksepka  to think that it was an earlier cousin of humming birds and swifts.  It looks really cute.  A bit like a prehistoric cave drawing of a chick.   A bite sized morsel for a gigantic dinosaur.   Had they still been around of course!

Zhejiang Museum of Natural History, China, purchased a unique fossil.  It was found by a local farmer.  It is a Pterosaur lying next to a fossil egg.  It is assumed that the pterosaur laid the egg.  Subsequent research suggests that pterosaurs behaved more like reptiles than birds when it comes to laying and looking after eggs.  Current theory is that they buried their eggs and left them.   Unlike birds who invest considerable energy in incubating their eggs.  The egg itself had a relatively soft parchment like shell, which was not strongly mineralised.

Early birds: This blog is under review and more information will appear shortly.    For related topics please see our blog on the Largest Eggs in the World.  You can see some amazing bird fossils in various museums around the world although sometimes casts are shown instead of the original – which is obviously disappointing.  It is understandable that such great treasures need to be studied some of the time.