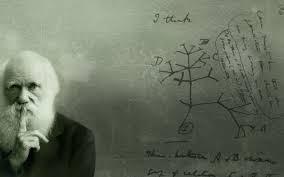 Of Charles Darwin: ‘Fossils, Finches and Fuegians’, by Richard Keynes

If you fancy a fascinating read, try  ‘Fossils, Finches and Fuegians’.  It is  an account of Charles Darwin ’s travels on ‘The Beagle’.   It is by his great grandson, Richard Keynes.   Here are a few bits that made us chuckle…
“I am quite charmed with Geology but, like the wise animal between two bundles of hay, I do not know which to like best .. the old crystalline groups of rocks or the softer and fossiliferous beds … (but, he decides) there is nothing like … finding a fine group of fossil bones, which tell their story of former times with almost a living tongue.” Charles Darwin. 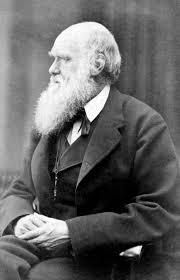 ‘The untidy piles of fossils dumped by Charles on the spotless decks of the Beagle were wholly contrary to naval tradition: ”Wickham, the First Lieutenant -a very tidy man who liked to keep the decks so that you could eat your dinner off them.. used to say, ‘If I had my way, all your damn mess would be chucked overboard, and you after it, old flycatcher.’  Sounds like Wickham needed to see the Fossil and Crystal Shop!  Mmm all that systemising might well earn Charles Darwin the attention of today’s psychologists – young collectors, be not deterred!

Not of Charles Darwin but of the remarkable Mary Anning: Remarkable Creatures by Tracy Chevalier

Another of our favourites is Remarkable Creatures by Tracy Chevalier.  She tells the story of Mary Anning – she of ‘she sells sea shells on the sea shore’.   Mary Anning was poor and not particularly educated at all.  But famously, she found and sold  fossils in Lyme Regis. 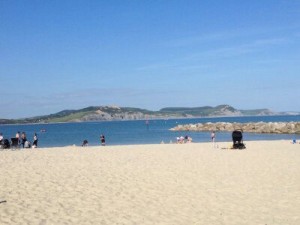 The beach and cliffs at Lyme Regis

As Tracy Chevalier tells so beautifully, Anning was really responsible for finding many of the study fossils which were taken up by the big (male) names of the time.  Her specimens are still highly prized in our museums today.

Chevalier describes Anning’s friendship with the educated Elizabeth Philpott.   Philpott, another female fossil fan, whom Chevalier depicts as a great and necessary champion of Anning, helped her ‘hold her own’ when making deals with the academics and key players of the day: De La Beche, Murchison, Agassiz, Birch (Bosvile), Konig…. Let us not steal the highly absorbing thunder of Chevalier.  Suffice to say she tells the story with great passion, contextual information and human interest.  A breezy, educational and thoroughly satisfying read.  Loved it.

The founding force behind the Fossil and Crystal Shop is also a woman.  Recognising that Fossils had been left largely to ‘fogeys’, if you’ll pardon the generalisation (hence our Fossils for your Indoor Shed section!) , she saw the potential for dusting off those old specimens and putting proudly on show as part of the interior decor schemes of houses.  Read about the trend in Fossils, the newest thing on the planet.  Or new approaches to cataloguing and storing, if you prefer.  It could save a marriage. 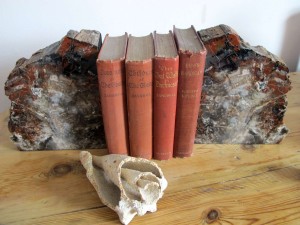 Fossil Wood Bookends – we think Charlie would have approved

We’ve got a section for kids too, of course, often big dinosaur fans – oh, and jewellery.  Wear Your Passion – and we do!  We also have a Trophy section – no risk to living creatures.  We shouldn’t leave out the gardeners – last but definitely not least Rocks al fresco.  We have many other ‘Bare Bones Blogs’ which you can browse for yourself but you’ll find geology, interior design, kids activities and so so much more.

And if you want to talk to us or can’t see what you want, Contact Us or Follow us on Facebook, join in, we’d love to hear from you.  What’s your favourite Geology read?